There's a trend in recent nutritional advice toward the use of these four healthy grains. But they aren't new grains, each one of them has been a staple food for thousands of years in their respective cultures of origin.

While most grains are categorized as acid foods, three of these organic grains are actually alkaline. (All but brown rice.) The Western style diet is composed of predominantly acid foods--meat, wheat, corn, sugar, cheese, and coffee to name but a few, so the addition of alkalizing foods is much needed.

Grains can be difficult for some to digest, which is just one of the many reasons we should begin soaking our organic grains before cooking. This begins the breakdown of the grain, making less work for our bodies and digestive enzymes. But these four grains are touted as easy to digest even without the soaking.

Gluten is a particularly difficult protein for our bodies to break down, and all four of these healthy grains are gluten-free. Two of them, quinoa and buckwheat, aren't technically grains at all, but seeds from non-grassy plants, part of a group called pseudo-grains.

Organic is always the best choice to avoid the residues of herbacides and insecticides. 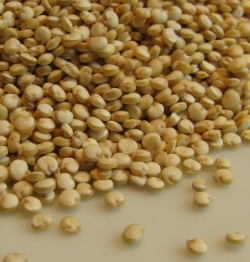 Actually not a grain, but a seed from a plant related to spinach, quinoa (pronounced KEEN-wa) comes to us from South America where the ancient Incas and the Indians of the Andes mountains cultivated and revered it. They called it "the mother grain". Because of its unusually high nutritive value, modern researchers are calling it the "super grain".

What makes it so special?

Not only is quinoa higher in protein than other whole grains, but it provides complete protein--meaning all 9 of the essential amino acids we must obtain through our diet, are present. This is especially helpful to those who are avoiding meat products and need an alternative source of protein. Of the amino acids, quinoa has higher amounts of lysine, cystine, and methionine than other grains. Lysine is important to tissue growth and repair.

Quinoa is a better source of iron than other whole grains, having 4 times the iron as brown rice. Also high in content are calcium, phosphorus, vitamins A, E, and B vitamins.

[A rumor running rampant on the internet is that 1 cup of quinoa has more calcium than 1 quart of milk. I checked the USDA's Nutrient Data Laboratory where one quart of 2% milk is listed as having 1171 mg of calcium. One cup of cooked quinoa has 31 mg calcium, so ... BUSTED!]

According to Weston Price's studies, the Indians of the Andes mountains valued quinoa especially for nursing mothers. He also found in Africa a grain that was used extensively by nursing mothers--it turned out to be the same grain. Quinoa.

Quinoa's popularity is soaring as people discover its great flavor, versatility, and short cooking time. Cooking quinoa is easy and you'll find trying new quinoa recipes to be a joy. While it may be more expensive than other more familiar grains, it's a powerhouse of nutritional value. 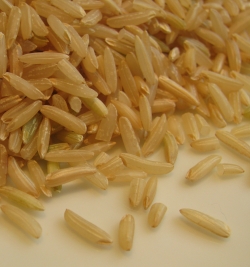 With over 7,000 (some estimates say 40,000) varieties of rice being grown and consumed, it is a staple food for over half the world's population. Full of B vitamins, iron, vitamin E, some good-quality protein (10%), vitamins, minerals, amino acids, and fiber, it provides complex carbohydrates, a steady supply of energy for our bodies.

It is free of gluten, the hard-to-digest protein at the heart of celiac disease, and has less phytic acid, a compound that interferes with our ability to absorb nutrients, than other grains. It is called a strengthening food as it reduces mental depression, calms the nervous system, and strenthens internal organs.

Of all the whole grains, brown rice is considered to have the most balanced yin and yang properties by the peoples of the Orient. In Ayurveda, the ancient healing system of India, basmati rice in particular is considered the most balanced. Kitchari is a traditional Indian dish comprised of brown basmati rice and beans, and offers many health benefits.

Recently, brown rice has been found to help lower cholesterol levels. It contains a compound called oryzanol, which is chemically similar to cholesterol lowering medications. For estrogen-related problems, like some breast cancers, the fiber in brown rice helps clear excess estrogen by binding to it. The particular type of fiber found in brown rice is excellent too, for promoting easier bowel movements and improving colon transit time.

Check out some quick and easy brown rice recipes to find more ways to integrate brown rice into your diet. 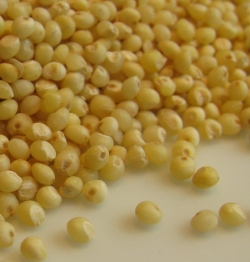 Also known as sorghum, millet has been used mostly as bird seed in America until recently, but it has been a staple food in China, Ethiopia, and India for thousands of years. It and barley were the main food of Europe during the Middle Ages before corn and potatoes made it on the scene.

Being gluten-free and highly alkalizing are the two traits gaining organic millet newfound popularity in America. With the Western diet so overly acidic, millet's alkalizing effect is preferred by some over the more common, but more acidic, brown rice. It is the most alkaline of all the true grains.

Millet is especially regarded for the treatment of candida yeast overgrowth. Yeast thrive on all the refined sugars we consume and can actually create sugar cravings within us. I have personally found that after eating millet there is a definite lack of a craving for sweets, as if it has somehow magically "subdued" the yeast. See here for my favorite millet recipes.

Millet has a good amount of protein (one of the highest of grains at 15%), B vitamins, and high amounts of iron, magnesium, and potassium. There is more fiber in millet than in an equivilant amount of brown rice. It is considered very easy to digest and has less phytic acid, the anti-nutrient that interferes with mineral absorption, than other whole grains. Those concerned over the mucus forming qualities of various foods will find that millet is less mucus-forming than rice, oats, rye, wheat, or barley. 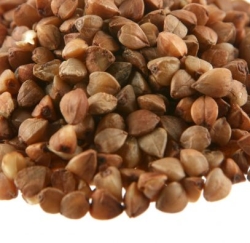 Not at all related to common wheat, nor even a true grain, buckwheat is actually the seeds from an herb related to rhubarb. It is a staple food in Eastern Europe and Russia in the roasted form, called "kasha". In Italy it has been used for pasta, in Japan for soba noodles, and in the United States for buckwheat pancakes. China is both a big producer and consumer.

It's use was common in the U.S. in the 18th and 19th centuries, but because the plant grows best on lower fertility soils, the rampant use of nitrogen fertilizers in the 20th century made its cultivation fall out of favor.

Like quinoa, organic buckwheat provides complete protein, having all 9 of the essential amino acids. And, again, like quinoa, buckwheat is high particularly in the amino acid lysine which is used for tissue growth and repair. Rich in calcium, iron, vitamin E, and B vitamins, magnesium, manganese, zinc and copper; buckwheat is gluten-free and contains health-promoting flavonoids. It is believed to help to lower bad cholesterol levels as well as blood pressure.

A valuable trait of buckwheat is the slower breakdown and absorption of its particular carbohydrates. This raises blood sugar levels more evenly, giving you a steady supply of energy, and leaving you feeling full longer. While this is great for all of us, it is especially good for those suffering with adult-onset diabetes, helping to control their blood sugar.

Adding healthy grains to your diet

If you're looking to improve your diet, and aren't we all, adding these healthy grains to your recipes is a move in the right direction. Use any of them as you would other whole grains, in casseroles, pilafs, salads, and sautees. Stick to organic grains for the best nutritional value. Not only do we avoid introducing toxins to our systems, but we support green agricultural practices. 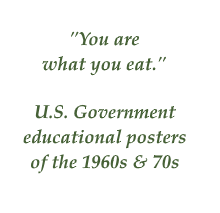 Recipes for Kitchari, a traditional Indian dish of rice and beans.

Healthy Cooking Oils The healthiest cooking oils may not be what you expect. Learn which fats contribute to a healthy body.

Cooking with Yogurt Learn about the many uses for yogurt in your meal planning and how to get the most out of one container.