The Salt Water Flush is an optional part of the Master Cleanse methodology, a form of fasting and detox cleansing. The flush is used to clear and cleanse the bowels and entire GI tract of toxins, mucus, and parasites.

You do this by rapidly ingesting a quart of salt water. Being rejected by the body, it moves quickly through the system, resulting in a liquid bowel movement much like a forceful diarrhea.

Please be advised! I do not recommend the salt water flush; it's included here only for informational purposes.

How to do the salt water flush

The Salt Water Flush recipe consists of 2 teaspoons (fine grind) uniodized sea salt in one quart of warm water. This is to be drunk first thing in the morning, on an empty stomach.

Afterward, it is suggested you lie down on your right side for 30 minutes, helping the fluid to leave the stomach more completely and flow into the small intestine. Stomach massaging can be used as well.

The solution is so distasteful to drink, that a number of suggestions have been made, the most popular of which are:

An urgent and recurrent movement of the bowels should occur in one to two hours' time. The theory states that the salt water mixture "has the same specific gravity as the blood, so the kidneys cannot pick up the water and the blood cannot pick up the salt", so it simply "passes through" the digestive system. But this is just theory. There isn't scientific evidence on this.

Should you do the salt water flush?

There are dangers to the salt water flush and it doesn't work for everyone. But some people really swear by it.

When it works as promised, the salt water flush does clean out the intestines, but for most, it is a distasteful process. The solution tastes horrible, the gag response must be suppressed, and it's a large quantity to get down in a short amount of time. Frequent urgent needs for the bathroom rule your morning schedule.

For those whose systems absorb the salt water rather than passing it through, experimentation with slight adjustments to the ratio of salt and water is necessary to make the flush work. In the meantime, however, these people are usually miserable from the large ingestion of salt.

There are alternatives for cleansing the intestines which are easier to do, gentler on the system (and the psyche), and just as effective. During a fast, preserving an attitude of rest for the body, kindness to self, and openness to insights and expansion, is important for experiencing the greatest benefits and healing.

So even if it works great for you, but you dread doing it and hate the process, be aware if it's bringing down the attitude and atmosphere of your fast.

After using the salt water flush, care should be taken after the fast to rebuild your healthy internal flora. Probiotic foods or supplements are recommended to begin to get the good bacteria re-established.

Using the Master Cleanse "lemonade" drink can be a wonderful method of healthy cleansing fasting, as the many followers can attest, but consider the salt water flush an optional part of it.

See the other methods of intestinal cleansing for help in deciding what is right for you. 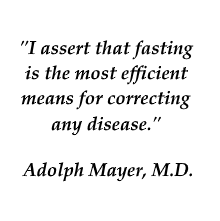 Dry Skin Brushing shares the many health benefits derived from this quick and easy-to-do practice.