The problem is this flush doesn't work as predicted for everyone. Some people can't keep the salt water down and vomit it up almost immediately; some people's systems, possibly having a different balance point, absorb all that salt water rather than passing it through, thereby gaining the extra water weight and storing the extra salt.

This can cause problems for hypertensive individuals and those with a tendency toward edema, can cause lower back pain from overworked kidneys, not to mention uncomfortable bloating. This would hinder the body's ability to detox and would instead, itself, become an additional burden to the body's systems.

If these difficulties happen to you, senior Master Cleansers will suggest you alter the amount of salt slightly until you find the amount that moves right through your system and produces a bowel movement within one hour. However, meanwhile, you have already absorbed all that salt, 2600-4700 mg of it, depending on the brand.

How many times should you attempt this while you search for that perfect balance point?


Granted, the more serious of these effects occurs in individuals for whom the process doesn't work at all, for those whose systems absorb the salt water. But, the first time you do a salt water flush, you don't know if you'll be one of those people or not.

Medical conditions which prohibit the use of the salt water flush:

Drinking sea salt water sounds so wonderfully natural and healthful, we can easily be drawn to this method of colon cleansing. But fighting a gag response or actually throwing it up, as so many do, should be a red flag. Forcing something on the body that it clearly doesn't want, is a red flag. The "downer" this procedure becomes during peoples' fasts, is a red flag. The manipulative attitude toward our bodies, is also a red flag.

Many of us drink water with a pinch or two of high quality sea or crystal salt mixed in for the minerals and other healthful benefits. But sipping a glass of salt water that tastes good, and feels good, is very different than chugging down a quart of salt water while the body protests every inch of the way.

To better understand those who say you have to do a salt water flush to understand how great it is, I decided I would actually give it a try. As I began to make the preparations, some little voice was asking, "Now WHY is it you're doing this? To experiment? To satisfy your curiosity? To satisfy others? When you have a clear sense that this isn't right for you, you're going to do it anyway?!"

I backed off. What's the point of an intuitive sense if you're just going to ignore it?

Forums reveal just how many people get the solution down, only to become fearful. "Oh God, what do I do now? I'm scared!" they write. I feel for them. And wish they hadn't drunk it. And, I wonder if there wasn't an intuitive signal they ignored.

Or, were they following their guidance by drinking it? I can't know what's right for anyone else. Everyone's needs are different. But I do know that fasting isn't supposed to be a scary experience. Actually, if you read the Who Can Fast page, you'll see anyone who is afraid of fasting SHOULD NOT fast. Same goes for the salt water flush -- if it scares you, or even just doesn't feel right, don't do it.

Again, the idea of using something as natural as sea salt for cleansing ourselves internally can be very appealing, but there are enough salt water flush dangers to make us think twice before attempting it. There are other alternatives for intestinal cleansing during fasting. 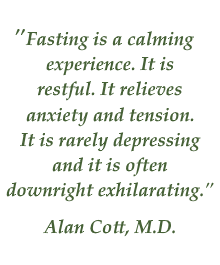 Cleansing Diets offers guidance on using a cleansing diet as a partial fast or as a means of preparation for other types of fasting.

Fruit Fast Details how to do a 1-3 day fast with apples.