The history of fasting can't have a beginning point because there's no reason to think that early man did not fast in the normal course of his existence; every other animal, even today, will fast during times of stress or illness, and sometimes even at the slightest uneasiness. It is a natural tendency for the organism, whether human or animal, to seek rest, balance, and to conserve energy at critical times.

Herbert Shelton (1895-1985), the physician who supervised the fasts of over 40,000 people in this century, wrote "Fasting must be recognized as a fundamental and radical process that is older than any other mode of caring for the sick organism, for it is employed on the plane of instinct..." 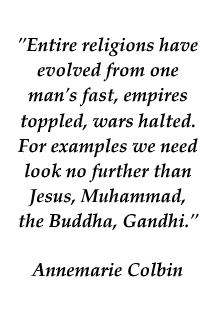 The early great philosophers, thinkers, and healers used fasting for health and as healing therapy. Hippocrates, Plato, Socrates, Aristotle and Galen all praised the benefits of fasting. Paracelsus, one of the three fathers of Western medicine, is quoted as saying, "Fasting is the greatest remedy--the physician within." Early healing arts recognized the revitalizing and rejuvenating power fasting promoted.

Early religious and spiritual groups used fasting as a part of ceremonies and rites--most often during spring and fall equinoxes. Today, every major religion practices fasting for various spiritual benefit.

Christianity, Judaism, Gnosticism, Islam, Buddhism, Hinduism, South and North American Indian traditions--all utilize fasting in one form or another, whether for purification, spiritual vision, penance, mourning or sacrifice. Many faiths prescribe regular fasting to prevent or break the habits of gluttony. In the U.S., the religious groups most noted for continuing fasting traditions are Episcopalians, Roman Catholics, Lutherns, and Jews.

Yogic practices, including that of fasting, date back thousands of years. Paramahansa Yogananda said simply, "Fasting is a natural method of healing." To this day, the ancient healing practice of Ayurveda includes fasting as therapy; its most distinguishing method uses kitchari, a dish of rice and beans.

Fasting in our modern day

Today, it is usually the healers and physicians with a spiritual and/or holistic orientation that recommend fasting for health. Conventional Western medicine has not fully embraced natural remedies. But as their acceptance of the body-mind connection expands, they are increasingly willing to work with that powerful influence, attempting to not interfere with, but rather to foster the body's own healing mechanisms. As medicine evolves in this direction, it will undoubtedly "rediscover" fasting as the invaluable method of self-healing that it is.

Scientific research is proving that there is unseen energy being directed through the body that will naturally incline the body toward balance and health. Even Dr. Mehmet Oz, M.D. has said he believes the future of medicine lies in the study of the energy patterns of the body and learning how to enhance those patterns positively. They will continue to find all the evidence they need to prove the body is more than just the physical body we see, more than just biological processes.

No amount of surgery or medical procedures will cure a body that isn't physically, emotionally and spiritually directed toward healing. And any scientist will concede that only the body itself can restore tissues to their original state of perfection. Many times what natural remedies succeed in doing is gearing the other aspects, the emotional and mental and spiritual aspects of our being, toward health. Fasting is a prime example of this. Even a one-day fast will bring subtle, and sometimes not-so-subtle, changes to the overall psyche.

Return to top
Return from History of Fasting page to What is fasting? page 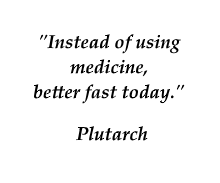 True Hunger is the signal to break a fast. Learn what it is and how to identify it.

Benefits of Fasting Learn how broad the benefits are, affecting us not just physically, but emotionally and spiritually as well.