One of the benefits of fasting is the effects it has on our emotional states. You will likely feel more emotional during, and perhaps right after, a fast. But this isn't a negative; it's actually a positive thing, because it's an opportunity for an emotional cleanse.

This is the reason it's so important to slow down during a fast, to be free of some of your usual obligations -- it allows time for inner discovery.

If you're rushing out the door to make some commitment, you may miss the opportunity to gain a new insight, to see things differently and more clearly, to let go of some emotional baggage, to experience the release of some long-held pattern.

The emotions that come up while fasting often appear with more force than usual. Your first response may be "Wow where did THAT come from?" and then, "Oh I'm just being overly emotional", followed by, "This really isn't such a big deal, I need to get over it."

You shouldn't brush these emotions under the rug. Let them be ok.

General examples of this process

How these emotional benefits of fasting manifest is difficult to describe. The actual process and details are unique to each of us, but below are some general scenarios that commonly play out. Often, they happen so subtly, we could easily miss it.

Once embroiled in an uncomfortable emotional turmoil and wondering why, you think, "Well that's the way I always react to this type of situation, it's just worse now because I haven't eaten." Then some curious little voice says, "So why DO I always react this way?"

Sometimes there's a clear answer to that question, and sometimes there isn't. But either way, there is often a release in that moment. Something has loosened its grip on you. You may not know what.

You may have asked yourself a hundred times before that very same question, "Why do I react like this?" But during a fast, there becomes a clarity of mind that sees through the fog, if not consciously, then unconsciously.

You become aware, maybe even just for a split second, of the unreality of what it is that holds you back. It isn't real, it's just a thought-form. Or it's just something that happened in the past. Or it's just something that scares you. And, as if by grace, the angst just sort of dissolves. There is an opening and a release. It happens so fast and so naturally, but you can feel you have changed in that instant. Some little part of you is free in a new way.

When we're lucky, these insights and clarity last longer than a split second. When they happen more consciously, we may get several minutes or several days or a lifetime, to peruse the insight and all its wonderful ramifications, and to play with our new-found freedom as we watch ourselves integrate this new tidbit into many areas of our lives.

Instead of sitting under the weight of this horrible feeling, like you usually do, there is a new lightness to it. An air-iness. There is an awareness that this just happens to be how you're feeling right now, that this is just a moment in time, and that the next moment may be different. You realize how fleeting this awful feeling can be, and should be, and will be. That there is light in your world even while you're surrounded by this particular darkness.

Perhaps you will "see" in a flash of insight how you've designed and created your life almost as if you were TRYING to make yourself feel this way. "Well, no wonder I feel confused, look at what I surround myself with", you might think as you consider all the people, the attitudes, the circumstances you've invited and allowed in your life.

In this flash you might see how you could chose a few things differently, and how some of the really little things have a really huge impact on you, and how easy it would be to make these few little changes and how the energy would open up more for you and for the potential you know you have.

You open the same bathroom drawer you open every day, but today you feel utterly appalled by the sight. You think with exasperation, "This drawer is such a mess! It drives me crazy!" Then the little voice follows with, "Why do I put up with this day after day?" You have no answer.

Then the little voice says, "Why don't I clean this out right now." "It'll only take a few minutes." "It'd really feel good to put this aggravation behind me." Convinced the little voice is right, you begin cleaning out that drawer.

And if you pay attention, you'll notice while you're cleaning out that drawer, that you're feeling lighter, that some heaviness is lifting, some confused and aggravated part of you is calming, releasing, opening up, freeing.

No, it's really not about the drawer. It's deeper than that. It's perhaps a sense of taking control. Perhaps it's about letting go of stuff, of material things or even of non-material things. Perhaps it's letting go of a pattern of consistent aggravation or confusion. In any case, it's choosing something new. Choosing a NEW pattern over an old one. And that happens very easily and naturally when we're fasting.

It's important we be open to all the benefits of fasting, not just the physical. We are so much more than physical bodies. There is SO much energy that is an integral part of us, forming us, creating and supporting us every moment. All this energy is intertwined and integrated on so many levels, one with another with another.

It may be absolutely beyond our ability to intellectually understand, but when an opportunity for a higher way of being occurs, we should grab it. And fasting does somehow create such openings.

After experiencing some of these "openings", you'll know why fasting has always been a part of spiritual practices. Certainly, fasting isn't the only way to experience them, but it's one that doesn't take years of training or study.

Return to top
Return to Benefits of Fasting page 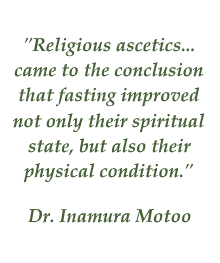 Fruit Fast Details how to do a 1-3 day fast with apples.

The real benefits of Fasting for Weight Loss, affecting deep and lasting changes in our lives.

Benefits of Fasting Learn how broad the benefits are, affecting us not just physically, but emotionally and spiritually as well.